One lesson that I often try to impart upon others who are thinking of taking up an artistic endeavour is that there is a lot to be said for getting your hands on the materials. For those who struggle with finding motivation, even more so. There is this strange effect that finding materials and actually getting your hands on them has on a person’s creative juices, to use a sort of weird term (I’ve never liked it. I don’t see a thing like juice fitting the paradigm).

If I talk to someone who wants to take up photography but doesn’t know where to start, the first thing I say is:  start taking pictures. Use your phone. Use your friend’s phone. Find any old camera and start using it. I mean really, if you say you want to get into photography but don’t have a camera, it’s the same as saying you want to drive cross country but there happens to be a stop sign on the way. It’s a small thing to get your hands on a camera these days. Chances are you already have one in your pocket.

If I talk to someone who thinks they’d like to take up embroidery, I tell them to get their hands on a hoop, some fabric, some needles, some thread. Don’t worry about whether or not you’re any good. You’re not. You have to start at the beginning. Same with playing a musical instrument. You will suck at first. Nobody is great first time around. Further, nobody gets great who plays the instrument and doesn’t enjoy it–even when they suck. When you begin taking up an art, it is always a long, challenging learning curve. But you find that it is rewarding, even in the beginning when you only learn a simple rudiment or happen upon something interesting by accident, and do it again, and again . . .

But of course many use their novice status as an excuse, just as the camera-less photographer may use their all-too-easy-to-remedy equipment shortage as one. Some claim lack of funds, though for the most part folks are generally able to commit funds to things they really want to, even if it takes time. Some people even claim a lack of motivation, for doing the very thing they claim to want to do (read: want=motivation).

For an established artist who struggles with getting more done, I might recommend The War of Art by Steven Pressfield. But for an initiate there is little point. They have to get themselves going. Experience putting effort in and drawing reward out. Put a portion of that 10,000 hours in and make a commitment. You can’t fight writer’s block if you are not yet a writer.

There are many excuses and I see them all the time. In the music community there is this odd preoccupation with getting your hands on better gear. The old archetype of the poor kid who finds a beat up guitar and plays it alone for years upon years is outdated, no longer relevant. It’s all too easy to dream up ways to get your hands on the next best model of your guitar or amp or drumset or synthesizer or whatever. There is this thing they call GAS, which stands for Gear Acquisition Syndrome. We pore over catalogs like Musician’s Friend and yearn for expensive toys, hanging unrealistic hopes on them, thinking they’ll inspire us to play more, or perform better, or sound better. For those of you who can relate, take it from me: if you can’t make the sound with one thousand dollars, you can’t make it with fifty thousand.

So, in the rare and beautiful case that an artistic beginner talks with me about approaching their chosen art, I always tell them to just get the thing. The beginner model. Put it in your hands. Start fiddling with it. Don’t be afraid, don’t find excuses, don’t put it off. Find the thing and sit it in your lap. Work it with your fingers.

What happens is magical. You begin to taste the rewards to come before you even make the art. You start to notice ins and outs of the field you are interested in before you really take it up. How the laptop keyboard sounds fill your head when you write an entire paragraph at speed. How the piano makes you feel sad when you simply hit the same two notes over and over slowly. How the recipe starts making sense when you smell and touch the ingredients and how ways you might begin to improve it start occurring to you. How the picture you want to paint seems to situate itself on your canvas with only a flake of imagination, leaving only technique (practice) between you and your goal.

Even if you have no idea what you’re doing, just putting your hands on the thing you will work on will inspire you to do it.

Since I began work at Salamander City, I have acquired many things. Some of them still wait to be used. Some will never be. Some have become great achievements. But in many cases, simply because I had little to no know-how, I had to imagine what I might do, and start gathering tools and materials. The Materials section of Craigslist is my best friend, let me tell you.

Have a look at this:

This is a bench I put together out of pieces of a telephone pole.  The pole was up for sale locally.  The fellow whose property it was on caught the power company workcrew as they were felling it and asked if he could keep it.  They were happy not to have to find a way to dispose of it.  He told me the pole had been in place for forty years.

Telephone poles, I learned, were treated in those days with coal tar, also called creosote.  It’s basically a particularly strong treatment against rot.  Strong enough that you must handle the wood carefully and not burn it or inhale sawdust from it.  I thought, what a great material to get my hands on.  It’s old looking, log shaped, and resistant to rot.  I’m sure I’ll have use for this.  So I bought the pole off the fellow for a few bills and took it to Salamander City.

Here it is, sitting on cinder blocks inside the cabin the day I purchased it.  It had been raining and the sections are wet.  I had the seller cut it into large pieces so it could be fit into the back of my truck. 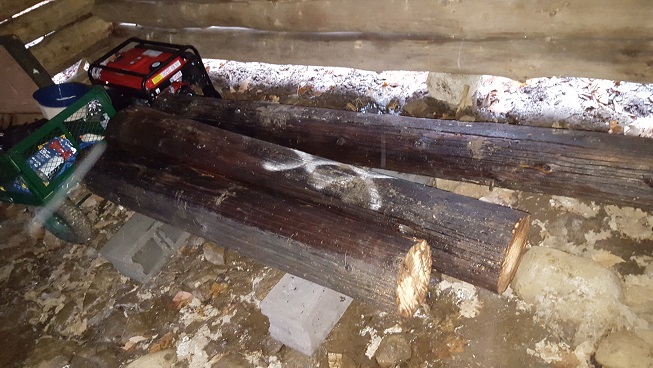 Not long after, I decided to learn to cut copes, the curved bowls in logs that allow them to sit against each other.  I’d need this, I reasoned, if I ever wanted to make a log structure.  Perhaps even to repair the one I already had.

Also, while I’m getting handy with a chainsaw, I could try to halve a log lengthwise.  It looked fairly simple (it isn’t).  I read some procedures, and took a shot at it.   The two halves I came up with are now two benchtops, and I’ll tell ya, one of them is way better than the other.  But I’ll bet that next time, they’ll both be better than either of the first two.

My point here is that the telephone poles inspired me to make these benches.  I didn’t know what I was gonna do with them to begin with, I only had guesses and vague ideas.  But once I actually wrapped a rope around a pole and dragged it up to my workspace, once I started carving the pole with my little chainsaw, the possibilities emerged.  Even a mostly dormant imagination could not help but dream up possibilities when presented with the tactile, visual, auditory, and even olfactory input of really getting in touch with your materials.

This is why I tell wishy-washy wannabes to stop thinking and start touching.  Heh.  Sounds dirty.  But it’s not, it’s a kind of communion with the natural ingenuity we are all born with.  That’s our talent among Earth’s animal life:  we think, we build, we learn.  And it’s all due to what our brains do when presented with the sensation of handling a thing we might use.