Not a pretty thing, if you ask me.  Few good things come of the fact of our poop, but it is there all the same.  We poop and poop and poop and wow is there a lot of poop to deal with.  I never thought I’d wind up having to deal directly with disposal of my own poop beyond flushing a toilet, let alone someone else’s.  But it has happened.  I brought it upon myself.

Salamander City needed a place to poop at.  Besides the cabin, when I bought the place there were no structures.  I knew I’d need a few.  The idea occurred to me that the best time to do it was at the beginning, before I did any real building work on the cabin itself.  If I could gather experience with that kind of work, I’d be in a better position to do it on the cabin.

It’s the same with any skill.  You learn incrementally.  Start with smaller projects.  Everything you have to bring together to make them happen—the resources, the patience, the thinking it through, the physical labor, the problem solving, the solutions to those problems—all of it will help you when you try to do the same thing in the future.  I use the same form of learning in the studio, teaching myself a new technique or set of techniques on a small project, then applying it a larger one, etc.

It takes patience to put off the thing you want to work on in order to teach yourself to do it first, but it is an invaluable practice.  I find that a good way to make it happen is to make sure that your smaller projects have value on their own.  Make it worth it, every step of the way.  As I’ve always said, motivation is the MVP in your team.  Nurture it well, and you will not stagnate.

So after the initial period of rescuing the cabin from further decay by getting it out of the way of water and stopping it from falling off its feet, I decided to turn my attention to the outbuildings and other outdoor structures.  These would be the benches I wanted to build around the fire, tables, a woodshed, a toolshed, and an outhouse.

The research for the outhouse was extensive, due to the fact that the bedrock at Salamander City is only just beneath the surface of the soil, maybe six inches up on the hill where the outhouse was planned to be.  This meant that I could not dig a pit beneath it.  So I had to find another way to dispose of the meadow muffins that would be deposited there.

I spent a lot of time looking at options for incinerators, composters, and even one model that bags up what you drop every time you do so.  Another option was a raised outhouse like the ones I’d seen at Northwest Camp in the Appalachians.  The idea there is that you build a platform for it a few feet off the ground, and let the poop just plop on the ground and sit beneath the structure.  The platform is wide, and skirted with lattice to keep animals out, but let air in.  Assisted by the usual addition of a carbon-based additive or lime, the pile undergoes normal decomposition as it would were it sitting on open ground (because it essentially is).

But the options just didn’t sit right with me, if you’ll excuse the pun.  The incinerators were expensive, troublesome, and required power and/or propane.  The composters are, well, gross.  And they require a fair amount of work as well.  None of the models had universally good reviews.  The above-ground model would be a more involved build, as well as not really shielding you from the poop.  Salamander City is only 2 acres; there was only one area that the crapper could be where it would conform to all codes and be far enough away from the cabin itself.  That location is directly uphill of the cabin.  Water runs downhill . . .  So yeah.  Not gonna happen.

I wound up going with the cheapest, simplest answer:  a bucket. 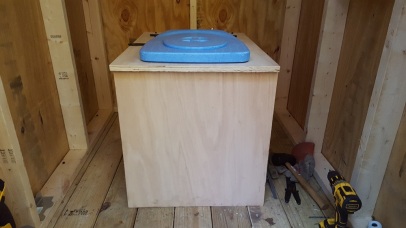 I constructed a plywood box as a seat, with a top that can be opened on a hinge, and with a large hole.  The hole is for a Separett Privy 500, which is a urine diverting seat, hose, and cover, that I ordered online.  Inside the box is a 5 gallon bucket lined with antimicrobial trash bags (I double-bag it.  Why take a chance?), sitting directly beneath your butthole.  The tray in the Separett catches your wee and you can decide where it goes from there using a hose that comes with it.  Mine just goes into a shallow indent in the ground beneath the outhouse.  One would have to pee a few gallons at a go for it to make its way out of there. 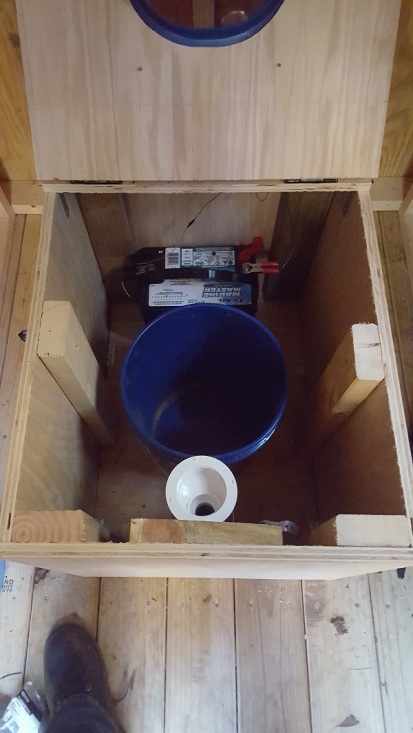 Also in the box is a PVC tube running out of it and out the back wall of the outhouse.  There is a 12V computer fan at the head of it, within the box, and a 12V marine battery.  I wired a switch to it and mounted it on the outside.  The idea is that when you leave a dump, you can flick on a switch and the fan pulls air in from the outhouse interior, across the bucket, and pushes it out the back of the building.  This keeps the place from stinking, and potentially can dry out the poop if I leave it in there long term.  The fan will run for months on one charge of the battery.

Other accoutrement include a window, a dutch door for selective visual exposure of your bathroom activity, a tin for holding TP so mice don’t get at it, disposable disinfectant wipes, a lantern, a coathook, some reading material and some toy dinosaurs for playing, and a battery operated LED string light that flickers and flashes when activated.

It is a delight to sit and poop in there.  Really relaxing.  The cleanup isn’t pleasant but it also isn’t messy.  Tying up the bags is the worst part, because of the exhalation of air from the inside of them.  But once they’re tied, the bags are set aside and new ones placed in the bucket.  I tie a bungee around the edges to keep them from falling into the bucket.  The bucket itself is sitting high enough that even a splatterpoop won’t miss it, though it might hit near the rim.  There is a short shield for this in the Separett also.  To avoid having to clean that, I placed a bottle of isopropyl alcohol in there and instructions to clean splatter off the seat if you left it.

The Ploppe Shoppe has been in place for more than a year now, and has had a half dozen different users or so, and perhaps thirty uses total.  It’s a light-use situation up there for sure, which helps.  It’s worked out well.  The Styrofoam seat that comes with the Separett doesn’t freeze your buns when it’s cold—something that is pretty important in the north.

Check out some pictures from the building process.

Picking the right spot was both easy and difficult.  The hike from the cabin to the shoppe is up a hill, unfortunately, but besides that, I like the spot.  When I was looking for the right place, I let my butt decide for me.  This area right under a huge, old hemlock seemed perfect.  Like a dousing rod, my butt just knew it was right. 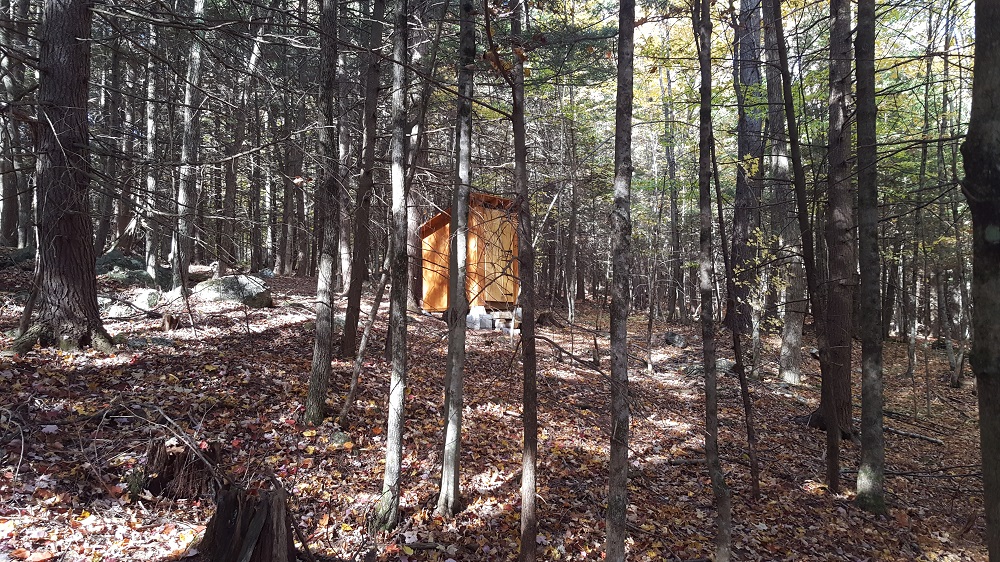 Since I couldn’t dig footings into the ground due to shallow bedrock, I stacked concrete blocks and leveled them.  Then came the sill members. 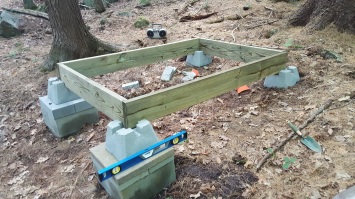 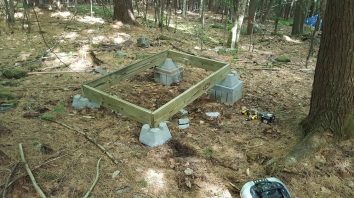 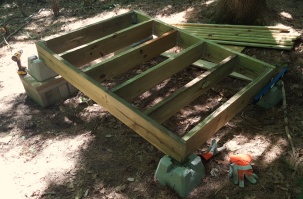 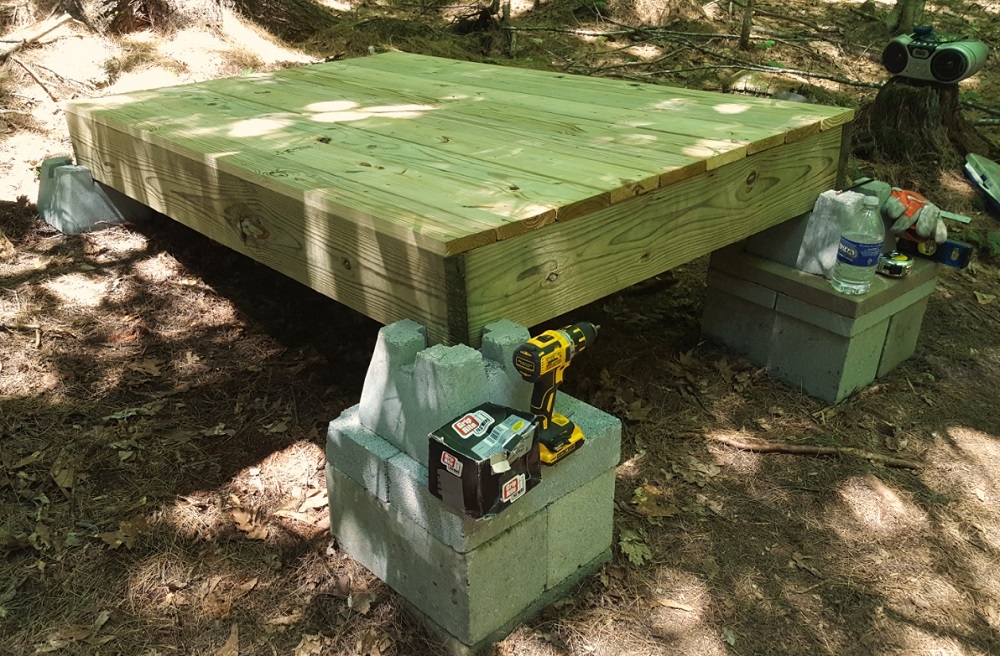 And the wall frames, including the frames for the door and window.  The rafters were last: 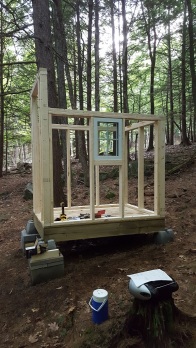 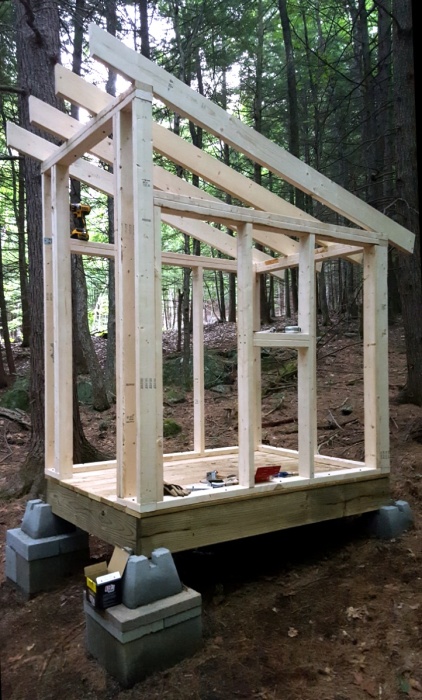 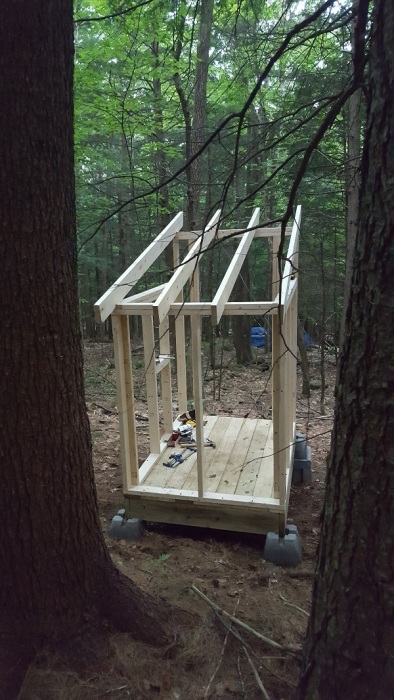 Then the roof:  the decking (locally felled larch), tar paper, and second-hand steel panels.  The window went in here as well. 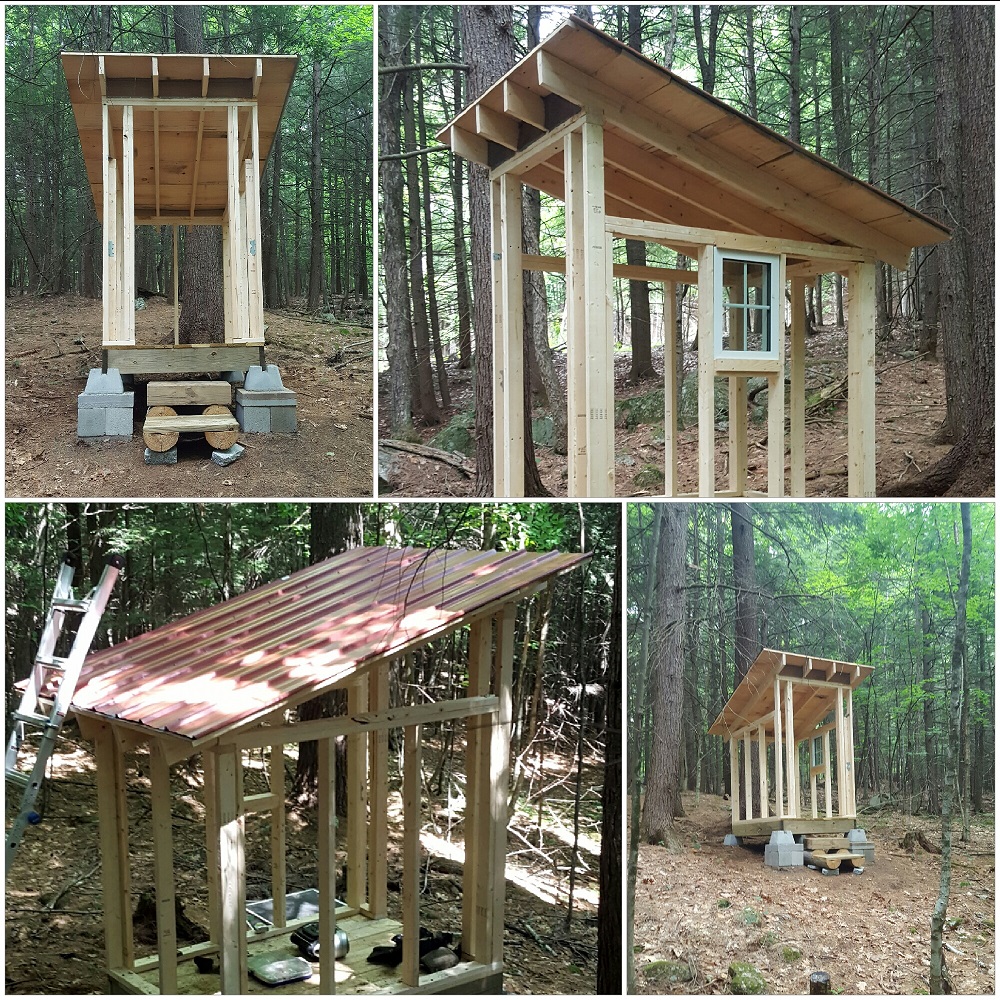 Using the same local larch, I built a barn-style door.  I went with a split dutch design so you can open either the top or the bottom, or both.  This way, you can decide what part of you will be exposed to your campmates.  I engraved and stained the name of the place on it, and Frank designed a neat sun/moon plexiglass fixture that looks like a sun from the inside, and a moon from the outside. 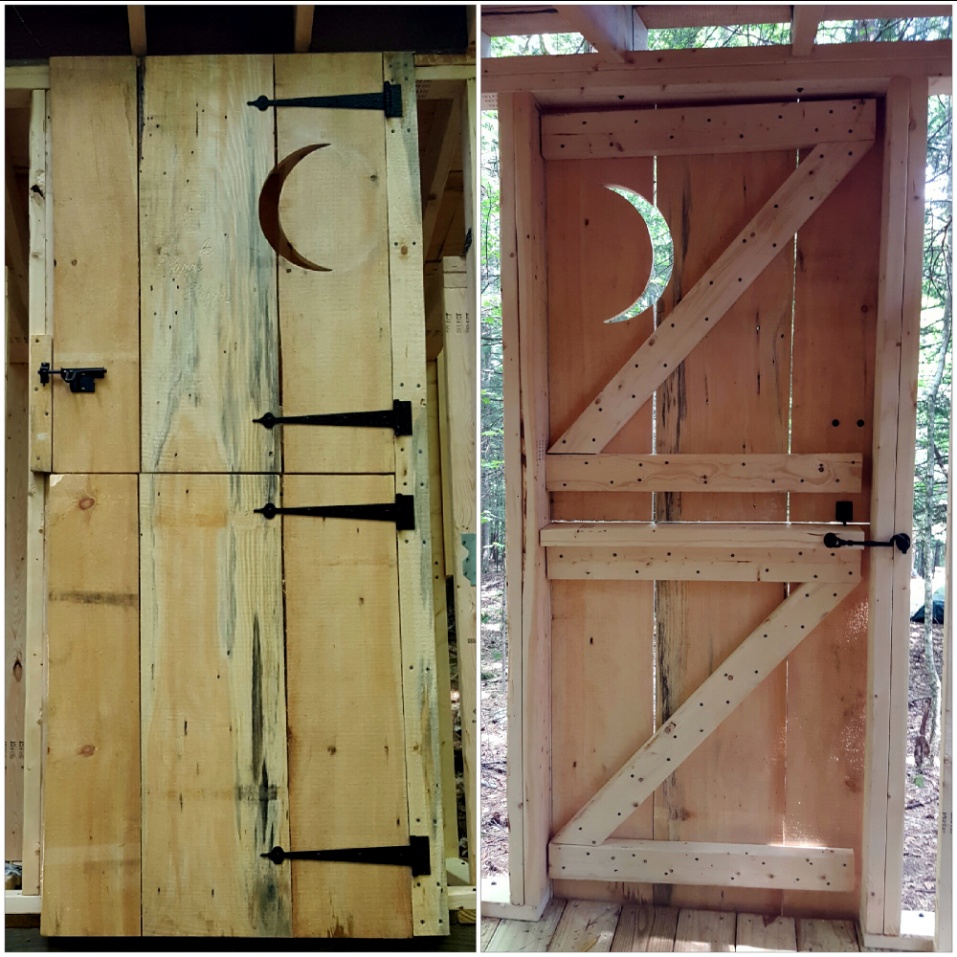 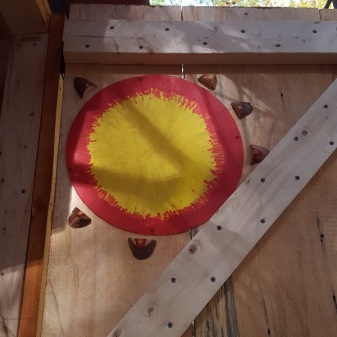 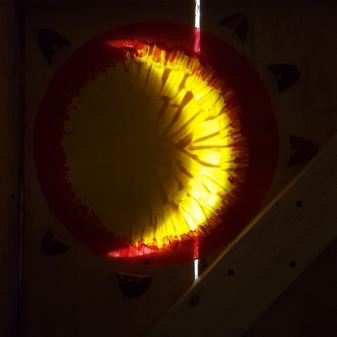 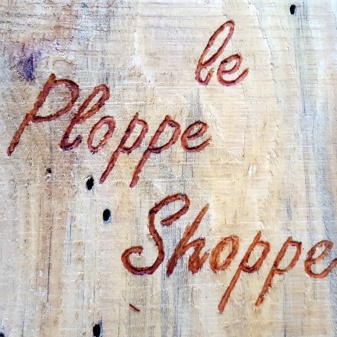 The front door was pretty high off the ground due to the incline of the hill.  I had to make steps for it, but didn’t want to do the usual stringer-platform design.  I improved on its durability (or at least, I think so) by constructing it solely out of creosote-treated reclaimed telephone pole and pressure-treated 6×6, pinned together with galvanized spikes.  I used a couple bricks to brace and level it.  Turned out pretty stable, as well as heavy and indestructible. 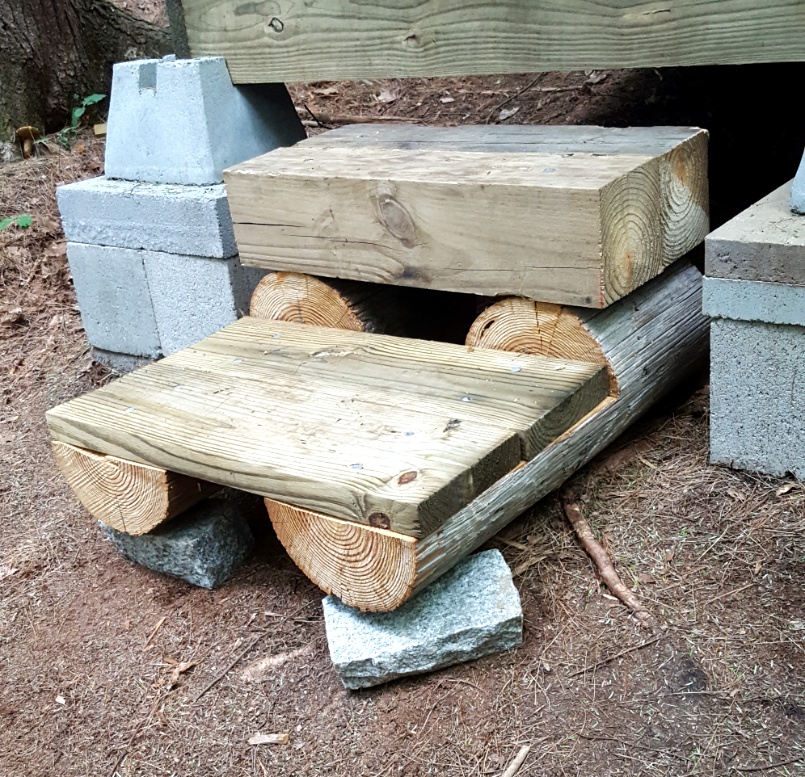 After a coat of stain, the Ploppe Shoppe was ready to accept all crap I could crap in it.  And that is saying something. 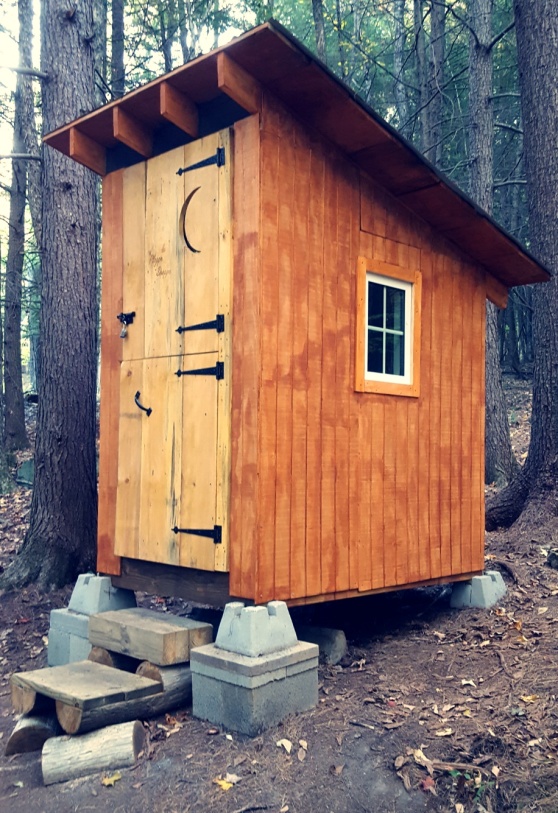 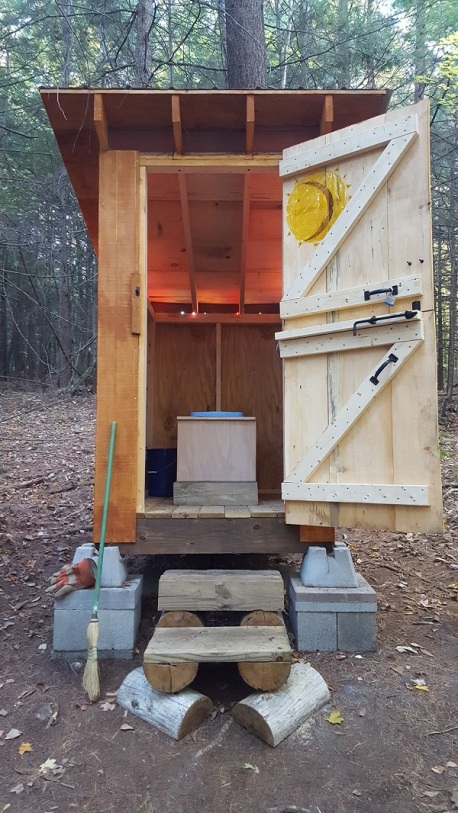 I made a lil walkthrough video.  Check it out: